Growing Asian Greens is quite new to many Australian gardeners, well quite new to me over the past decade anyway. I first started with Mizuna and Mibuna and was surprised at the high yields collected over that winter. Since then I have been experimenting with many different varieties with failures and successes, and as I have learned, the Tasmanian Spring can be the culprit.

Tatsoi  is a leafy, non-heading mustard (close to bok choi). They grow into a rosette of spooned shaped leaves as opposed to Pak Choy/Bok Choy which form upright stems. The handy thing with Tatsoi is they are fairly low maintenance in the veggie patch.

Tatsoi leaves come in generally light to dark green colours, however there are new varieties always being released. They are planted in spring (for a Spring to early summer harvest) or late summer/early autumn (for an autumn and winter harvest) in Tasmania. They grow very quickly and can be ready for harvest in as few as 30 days (possibly less).

It is useful to sow Tatsoi at 3 weekly intervals to extend the harvest period. Late summer/autumn Tatsoi usually does better than seed sown in the spring (well lasts longer). If you have ever wondered why your Asian Green goes to flower quickly in spring, if the seedlings experience very cold temperatures or a frost, this triggers a biological response to flower. Thus when planting seedlings in August and September, it is worth throwing a sheet over them on frosty nights or use a cloche/agricultural fleece. And I wouldn’t recommend sowing seed direct in frost areas (start in a hothouse or warm area).

If you can, plant in a spot against the house that may not get frosty. Obviously not as issue in frost free areas. In fact many vegetables in Tasmania perform better in our volatile Spring by using protection during those cold periods. Spring is a time we are constantly watching for frosts and protecting those new plantings that require them. Some springs we get nearly ideal weather (some Septembers I barely record a frost), others we don’t. In 2019 I had months of great spring Asian Green produce, but last year it was disappointing. There are a number of hybrid varieties available now and continuing to be released that have a higher bolt tolerance to cold or warm weather.

Tatsoi does enjoy well-rotted manures and compost being added prior to planting. And given it is leaf production you are after; application of high nitrogen fertilisers is useful. If the weather is dry, ensure you keep the soil moist. Tatsoi may go to flower once it is stressed from a lack of moisture. Another common problem I encounter from customers is not realising how dry their soil is. Sticking your finger a hands depth down will tell you if the soil is dry!

With tatsoi you can either break leaves off as you need and add to stir fries and salads/soups. Or after 25 to 35 days, cut the plant whole 2 to 3cm from the ground. They may re-sprout providing a 2nd harvest (albeit smaller).

In late winter/ spring, I recommend in cool areas to sow seed indoors or in a hothouse. Growing them to 4 to 6 weeks old this way will prevent them encountering the cold frosts that would cause them to flower. When planting out seedlings, just be gentle taking them out of the punnet and minimise root disturbance (All my plants I grow are from my seedlings!). Once planted out, like most early spring vegetables, check the weather forecasts and throw a sheet or fleece over the seedlings to protect from frosts. (You can find lengths of agricultural fleece on ebay or garden stores).  It may be a little more work, but they grow quick and you will have some lovely spring harvests at a time when there is less to harvest as we transition from winter to summer vegetables. If the effort is too much, just plant them in late summer/autumn.

Bok Choy has white stems, Pak Choy has green stems, generally. I believe the Americans tend to say Bok Choy and the British Pak Choy. So, call it however you like. Both are often also referred to as Chinese Cabbage. Bok Choy is pretty common in the fruit and veg shop these days. There are many varieties and hybrids available. Some have been bred for a higher tolerance to cold and / or warm weather thus are less prone to flowering quickly.

Planting is pretty much the same treatment as for Tatsoi. I recommend starting seed indoors and planting out at 4 to 6 weeks of age. And also protect from cold frosty nights if you want to minimise the chances of them flowering too early. This is common in Tasmania given our weather is up and down. But throwing a sheet over on cold nights (say below 5 degrees) is well worth the harvests in mid-September when we have little to harvest (except purple sprouting broccoli if you planted that the previous x-mas).

The two rules to follow when growing in Spring. Protect from frost and keep well-watered.  It is useful to plant at fortnightly intervals also. Sometimes the weather is nasty and they will bolt anyway in Spring, so the fortnightly plantings help mitigate this to some degree. As gardeners we can’t always protect them. When planting them in late summer/autumn, a lack of watering thus dry soil is the main reason for premature flowering.

If you eat a lot of stir fries then the small effort to protect from frosts (maybe 8 of them during mid-August to September for me) is well worth the 2 minutes those 8 times to throw some protection over. If you in a frost free spot your well on your way.

Some other interesting Asian Greens: 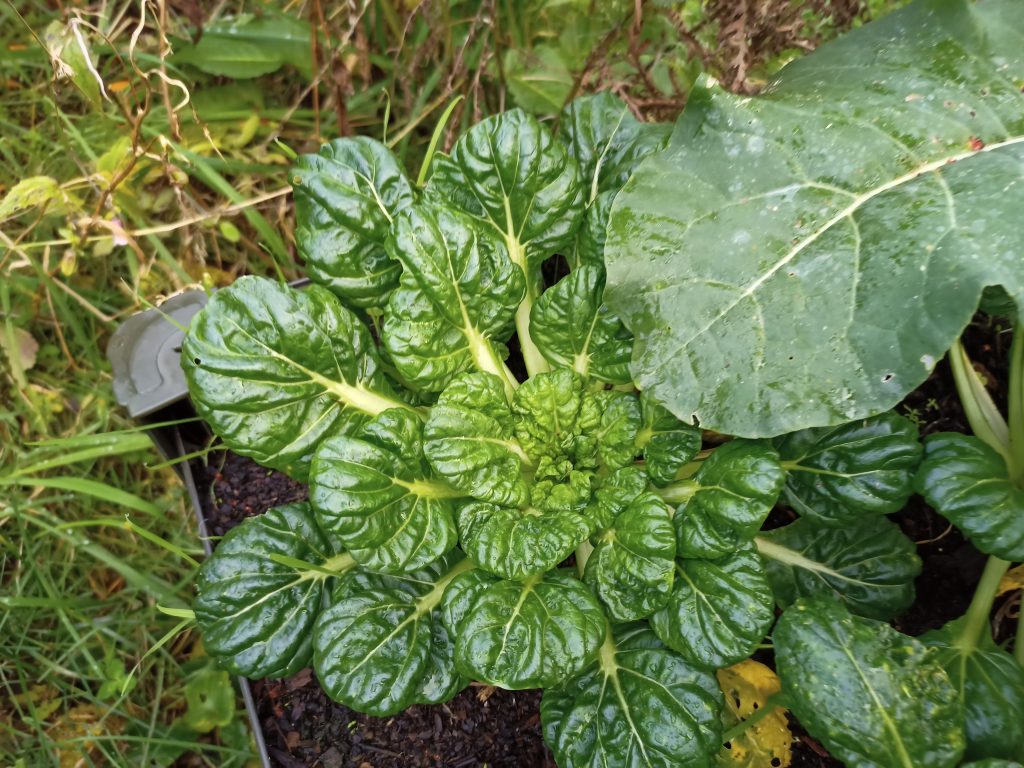